Posted by Dementia Dance on May 11, 2015 in Uncategorized |No Comments

On 4/23 I picked mom up at the ferry terminal. We got back to her place and unloaded bags.  Next was a trip to the grocery store. I asked her if she wanted to make a list. She declined, while looking in the fridge and cabinets. This did not bode well, especially since on the way to the store she said she hadn’t looked in the fridge and so wasn’t sure what she needed.

Once at the store, she headed to the produce section and chose a few things. Next, after asking me which way to go, she headed across the store to find cold cuts. I will stop with the specific detailed description of the shopping trip here, and leave you with this: We spent one hour and 15 minutes shopping for 3 breakfasts and one lunch that she would have on her own while on the Mainland in not quite 5 days. By the time we were done, I had over $100 of groceries in my cart, and had logged over 3000 steps on my Fitbit. It was like mom was building each meal in her head rather than gathering everything she needed in each department of the store. This was exacerbated in that she couldn’t remember where each major department was: Produce takes up the south end of the store. Meats live on the west wall, dairy & deli on the north wall, etc. Were I to foolishly call her on this, she’d tell me her lack of direction is because she doesn’t know this store, where she’s shopped for over 15 years. I’ve seen her do the same thing in the Island market, where she’s shopped for 35 years.
After taking mom back to the ferry on the 26th (a day earlier than she originally scheduled), I returned to her house to pick up the half dozen eggs she told me to take home. Keep in mind she has no date in mind to return to her Mainland home. The next time I know she’ll be back is before I take her to Montana, at the end of August. The fridge had the following perishable items in it, as though she’d be back in a few days:
* A head of lettuce.
* A pound of jack cheese.
* 8 slices of uncured ham.
* Apples, (old and new) two of them with one bite taken out of each of them. One had its bite taken out of it in December.
* 1 grapefruit.
* 1 tangerine.
* 3 yogurts.
* 13 eggs.
* A box of cearl ~ on the counter.
While I am grateful for the groceries, this is one of several things this trip we found where mom wasn’t doing as well cognitively as she had been in December. Usually, she takes food back with her or tells me to ‘raid the fridge.’ Checking the fridge when she returns to the Island has become standard operating procedure. 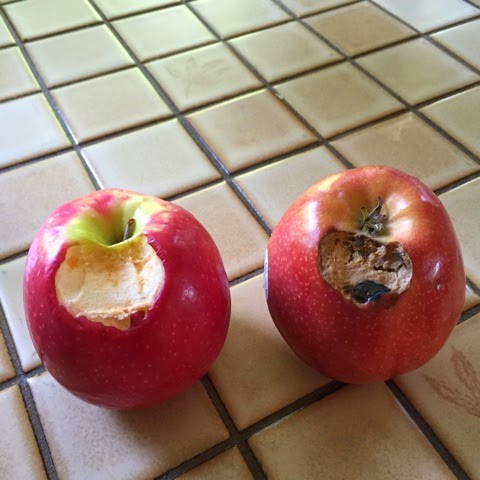