Posted by Dementia Dance on February 21, 2018 in Uncategorized |No Comments

Mom and I went down to dinner, and as I plotted, ended up sitting with two other ladies, rather than by ourselves. Lydia was outgoing, loquacious even, and seemed much younger than my mom. It didn’t take me long to see signs of her dementia. She asked all of us if we should order dinner two minutes after we had done so. She held down the social chit chat, rather delightfully, throughout the meal, but she’d loop back on herself here and there, conversationally, causing the much, much older Phyllis to look at me from across the table with a confused look on her face. I wanted to tell Phyllis, “It’s not you!”

Mom ate well while Lydia complained about the meal before us (which actually wasn’t that wonderful), and the cuisine in general. While obviously a far more cheerful person by nature than mom, she was going through the same ‘motions’ mom did up until recently. It was like sitting in between my past mom and my present mom, who spent about a third of the time doing the 1000-mile stare. One thing I found sweet and humorous, was all three ladies clucked about how much ice cream they ate now that they lived in AL. They could have ice cream after lunch AND dinner! It sounded like it was a guilty pleasure rather than a right, “I’ve been adulting for a damned long time, and I’m gonna have ice cream twice a day from here on out, dagnabit!”
The same Kung Fu school performed the lion dance and Kung Fu demonstrations as last year. It was very celebratory and the residents really enjoyed the show. Afterwards residents were invited to have their pictures taken with the lions. I encouraged mom. She walked toward the lions bowing. The owner of the school approached mom and asked, “You were hear last year, yes? I remember you” Mom said, “I think so.” She kept bowing to the lions as I kept trying to get good pictures. The school’s owner put his arm around my shoulder and said into my ear, “My parents are also in their 80’s. It’s very hard. We never thought we would be here.” It took everything I had not to burst into tears. He helped by saying, “Give me your phone so you can have a picture with your mom.” 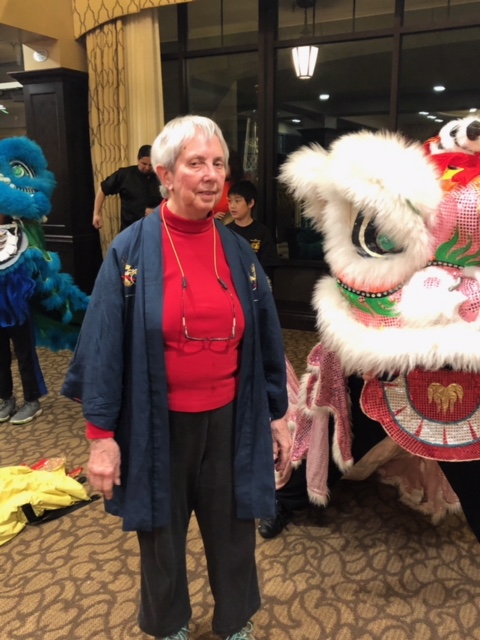