Posted by Dementia Dance on January 11, 2020 in Uncategorized |No Comments

I drove to the south-eastern edge of our state for work on Thursday. Friday was all about a double-garden rollout. And trying to get home. I headed west at about 2:30 after buying the only traction device Subaru deems acceptable on our vehicle. The pass between me and home was at def-con 3.8, and expected to get worse.

I emailed friends who have a cabin just east of the pass, just in case.

100-miles into my drive, I made the decision to stay at the cabin. Driving over the pass in the dark did not seem like a safe idea.

I woke up to a foot of snow on the car, drifts up to my knees, and the east-bound pass-crossing closed. I felt panicky while packing up. The car has “X-mode” for its all-wheel-drive system. I used it to get to the highway, where the road was plowed down to packed ice and snow.

The speed limit was 35, half the normal limit. Just over the pass, it was as white out, as I imagined it would have been dark last night. There was no way to tell where the sides of the road began or ended. A black truck passed me, and I put my faith and vision on that visible vehicle, and followed it until we were out of the worst of it.

Not my favorite drive! 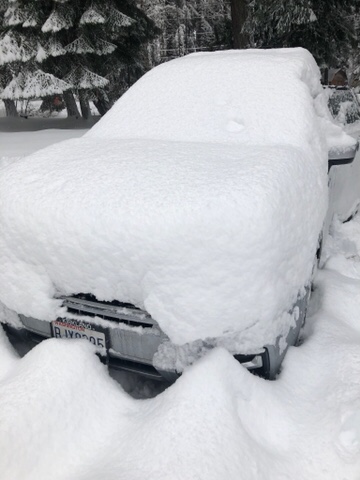